Of the many interesting historical blocks in Boscawen, this old Tavern on the north side of the Church is worthy of mention. Just when it was built and by whom, is a question. We first find David Ambrose as the owner who was succeeded by Justin S.(Sam) Ambrose who operated the Tavern. It was a regular stopping place for the stage coaches. The Tavern was a large square Colonial house and the barn was across the street, which a few of us remember as having a cupola and weathervane representing a running horse.

John Rines operated a brickyard, which flourished until his death December 1902. He ably served as County Commissioner and as Selectman of the town and in various other positions of honor and trust. He was a public benefactor.

In 1910 Dr. A. C. Alexander, Trustee of the Estate, sold it to Francis H. Rowley, D.D., President of Mass. S.P.C.A.. Dr. Rowley renovated the house and barn, making sleeping quarters upstairs in the barn. He then leased it to G.F.D. Paign, a member of Paign Furniture Company of Boston. He was a Civil War veteran and a man of much influence. Paign brought to Boscawen a different style of living, than most country folks are accustomed to. He had a large Peerless Touring car with a black chauffeur dressed in livery. The Peerless in those days considered one of the best automobiles, known then as the three P’s, Peerless, Peirce Arrow and Packard.

Servants in the home consisted of a cook and laundress. Servants occupied the rooms in the barn.

Paign had traveled extensively in the Orient, capturing much of that life with a camera. He became a regular attendant at church services and was a benefactor in many ways. He gave slide programs of travels had shades made for all of the windows of the church to make his programs successful. They did much touring and took the Pastor and his wife with them. It was a policy to always have pennies in his pocket to give the kiddies wherever they stopped. A penny in those days would buy a piece of candy and for many a kid a penny was hard to come by.

In 1912 Dr. Rowley occupied the house and this time instead of an automobile, a horse and stylish cut-under carriage was used. Mrs. Rowley always drove and enjoyed caring for the horse. The Rowley’s were a great asset to the town and he was frequently called on as a speaker for many occasions.

In 1927 Edwood Webster(Edward Webster) bought the house and sold it in 1936 to Frank Beede, President of Beede Electrical Company of Penacook. In 1950 Beede sold it to William Cook. The old tavern has had some changes over the years. While it was owned by John Rines, the house was rebuilt, giving it a hip roof as we see it today. The fire demon has also brought about some changes.

Finally, it can be said, the old Tavern and its distinguished owners have had a good moral influence in the community.

A petition written during the early to mid-1800’s requesting the Select Men of Boscawen not to license tavern keepers that run “disorderly houses”.

To the Select Men of Boscawen

We the under signed being inhabitants of said Boscawen, are conscious that the Laws relative to Taverners and retailers have not been duly observed, we fear that many of our young men are forming bad habits, wasting their time and spending their money and perhaps destroying their Souls! and it is evident that some families suffer in consequence of these evils which prevail among us. We therefore think it our incumbent duty to notify you of the danger of granting licenses to those who keep disorderly houses, to prevent 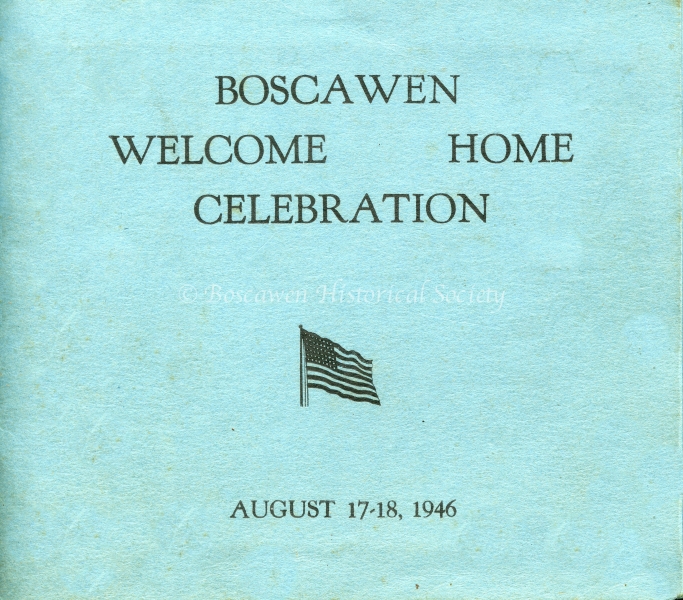 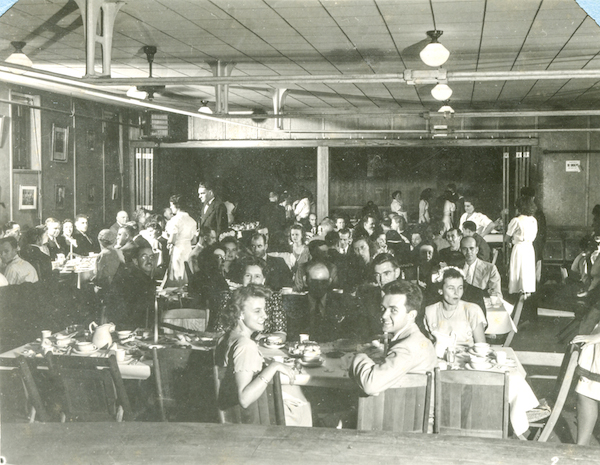 by Dain A. Trafton 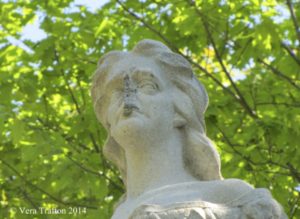 Given at the Deerfield-Wellesley Symposium 2015

“Outside the Gallery: Public Sculpture in New England”

Revised and Updated for the Boscawen, NH, Historical Society Website

In 1880 the Rev. J. H. Larry assumed the position of Principal of the Penacook Academy in Fisherville, N.H. and established the “School of Practice”. For the next three years the school published a semi-monthly newspaper called “Standard Bearer” which had a circulation of around 1,000 copies per printing. In 1883 the school closed and the newspaper was no longer published.

The listing from the 1883 edition of Rowell’s American Newspaper Directory.

“Here we unfurl our Standard, and enter the ranks of Virtue against Vice, Knowledge against Ignorance, Labor against Idleness, Truth against Skepticism.” 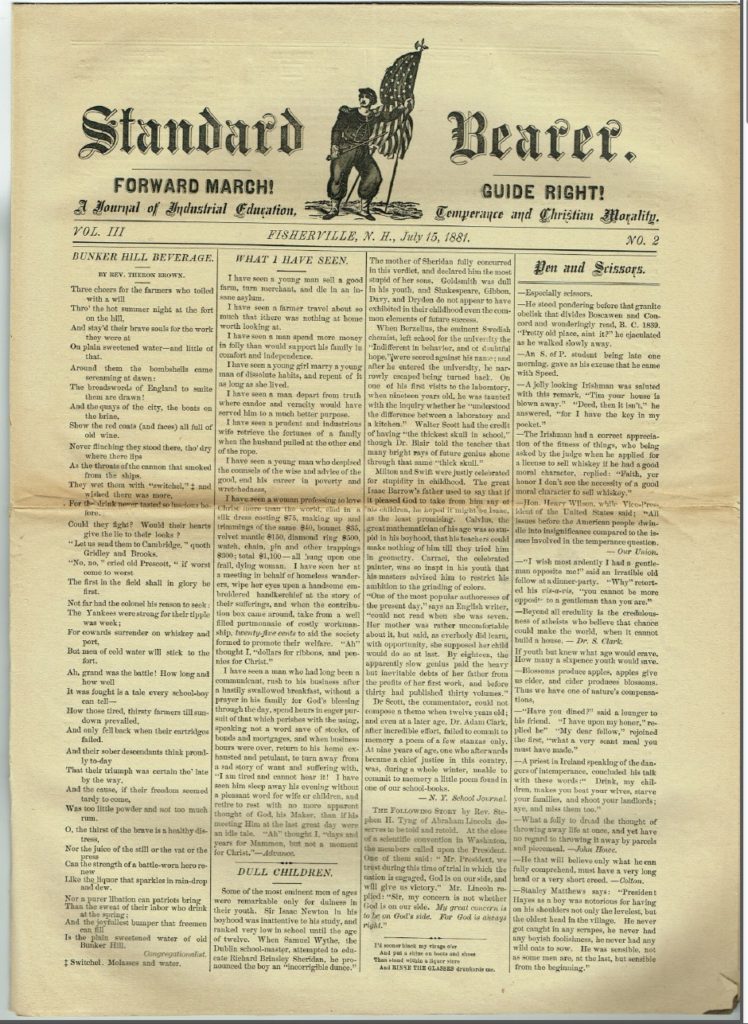 The Boscawen Historical Society would like to thank Student Conservation Association, AmeriCorps and the State of New Hampshire Division of Parks Recreation for the hard work that was put forth at the Hannah Dustin Memorial Site. 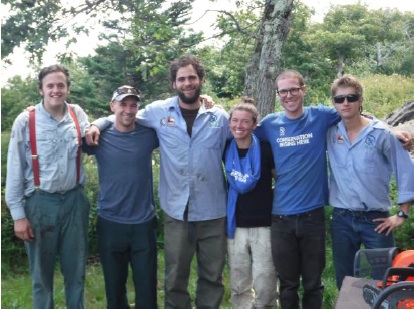 Click here to learn more about the Student Conservation Association 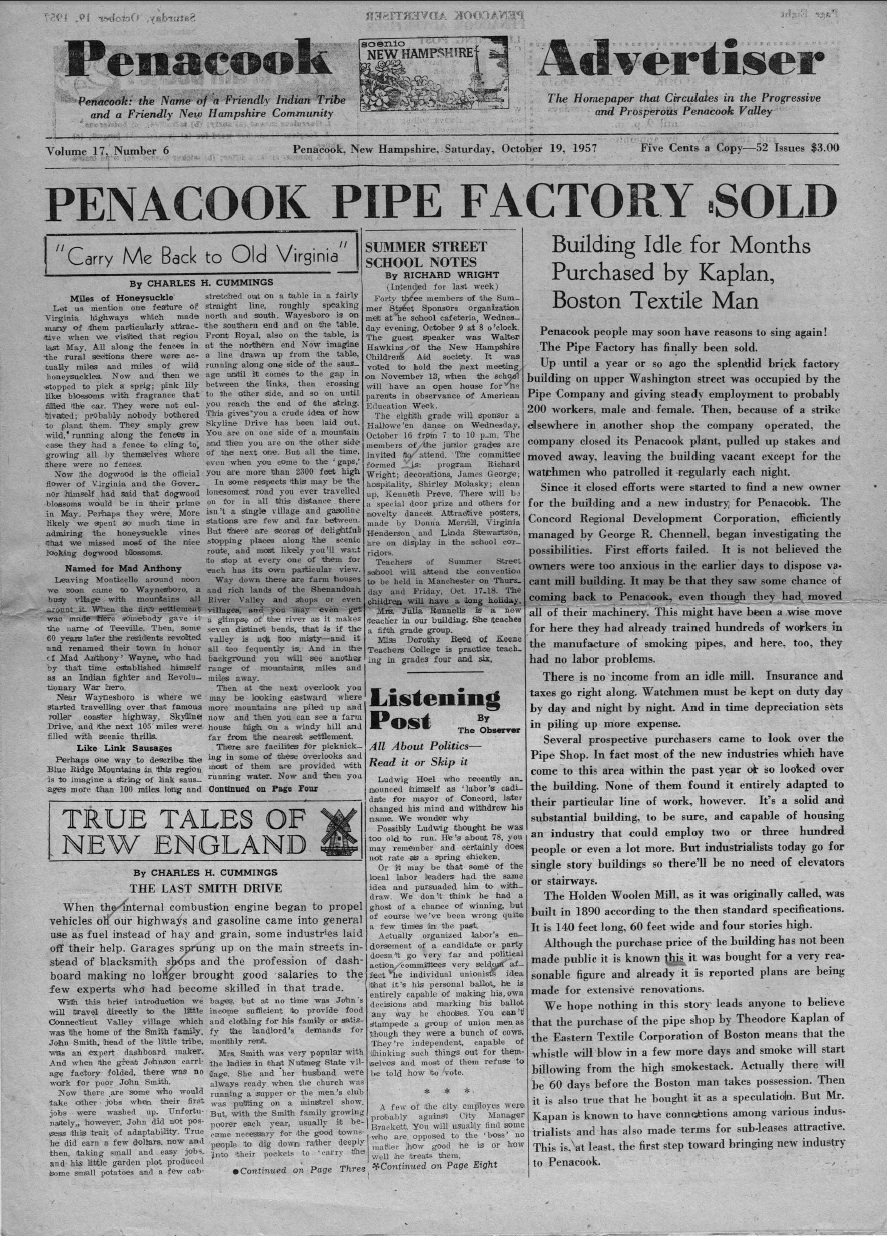 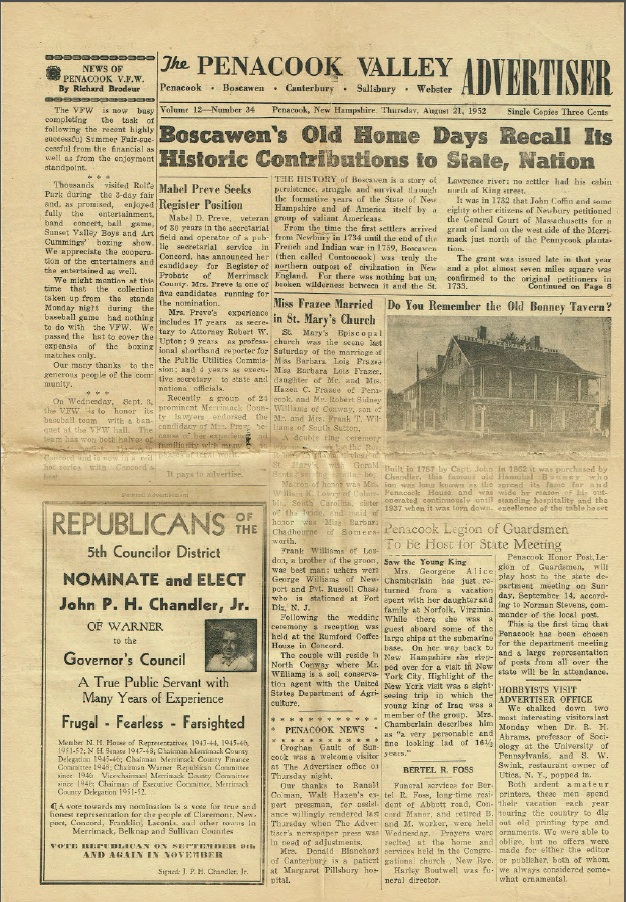 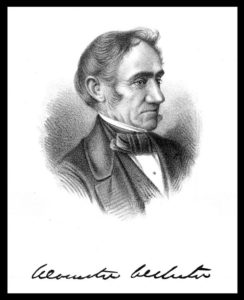 Worcester Webster, a cousin of Daniel Webster, served as postmaster in Boscawen from February 5, 1841 to January 15, 1852. In 1846 he created a “Provisional” postage stamp that was attached to an envelope addressed to Miss Achsah French, a 14 year old relative of Webster’s who lived in Concord. The stamp was dull blue ink, hand-stamped on a thin piece of yellowish handmade paper, with an adhesive to affix it to the envelope. Provisional stamps predate or take the place of the first official US stamps which were issued in 1847, as Congress set the postal rates, but had not yet printed stamps.

Since that day 168 years ago, this small envelope has found its way in to some very important stamp collections and has become known one of the rarest stamps in existence. It entered into a private collection for the first time in Washington DC in 1865. For twenty years it was in the possession of H.H. Lowrie who had received it from the the chief clerk of the general post office of Washington, DC. It was sold in 1894 and then again in 1912 to a French count who paid $5000 at auction and took it home to France. In 1922 the stamp returned home to America when a collector in Utica, New York purchased it for $11,000. The stamp has changed hands a number of times since then: in 1933, 1937, 1964, and most recently in 1989. In the 1989 sale it was purchased by an overseas buyer for $166,000. 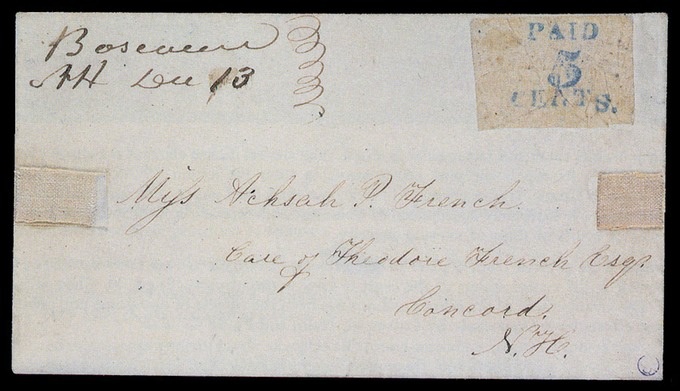 In June 2010 the Boscawen Historical Society received a letter from a George Masnick of Hamilton, Montana, who wished to donate an unpublished manuscript from the 1930’s that he had in his possession titled, “Boscawen 1846: a Settlement, a Sailor, and a Stamp”. Mr. Masnick was at one time a teacher at Harvard University; one day while in Brookline, Massachusetts he found a collection of stamp books in the trash. He had given the collection to his brother, who was a stamp collector, and when he died it was returned to George.

The manuscript:  Boscawen 1846: a Settlement, a Sailor, and a Stamp 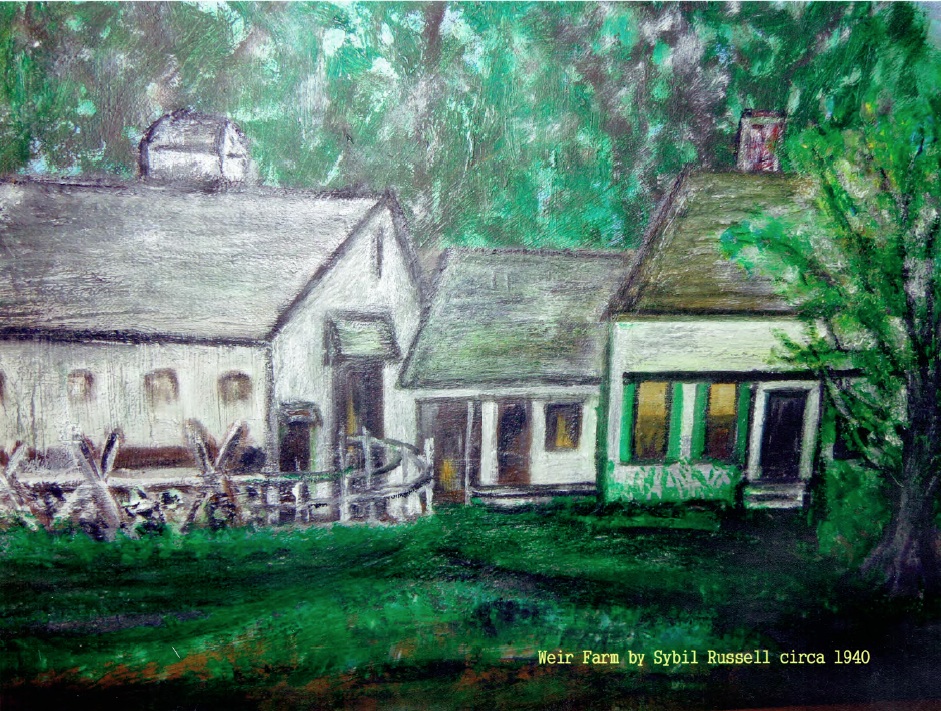 Their story begins in 1854 when James Weir and his sister Olivia purchased a little over 31 acres of land in the area off present day Weir Road, off from Queen Street. By 1903 the farm had grown to nearly 200 acres and was a successful wholesale, and later retail, milk producer. The farm itself was self sufficient in many respects with it’s own blacksmith shop, portable sawmill and ice-house.

In 1938 the Weir farm came to an end. John Weir, who was born in 1866, was finding it difficult to run the farm due to a lack of help, his own ill health and shrinking finances. His health finally forced him to move from the farm and live with his sister-in-law Myrtie Weir. He eventually deeded the farm to the Town of Boscawen and spent his final years in a nursing home.

Please click on the link below to read the full story in PDF format.